This book focuses on the legacy of James Edgar Paullin, MD, and the leaders in medicine he mentored, especially Henry Clifford Sauls and William Carter Smith. Both men, like Paullin, were dedicated to the Emory University School of Medicine and taught at a time when the young institution depended on volunteers from the community. Like Paullin, both men also were deeply involved in the growth and development of Piedmont Hospital. Their loyalty to one institution strengthened their loyalty to the other.

Such a book is necessary, even though Paullin’s medical contributions, including his care of President Franklin Delano Roosevelt, have been well documented in the national medical literature. Here at home, as Atlanta has grown into a nationally recognized center for health care and medical education, Paullin’s contributions and those of the people he mentored take on even more significance with the passing of time, and his influence still resonates, albeit almost silently, in the physicians and institutions of today.

Enduring Legacy of James Edgar Paullin, MD tells that story. Carter Smith Jr., MD, decided to be the storyteller because he is one of the few people living who knew Dr. Paullin and the people whom he met either in his early childhood or professional medical training. Certainly Smith saw—beginning in his childhood when he accompanied his father, William Carter Smith, MD, on ward rounds, and then later through medical practice alongside his father and along with his medical partner H. Cliff (Jake) Sauls, MD—the powerful influence Paullin had on these men and on the greater medical and medical education community. Smith observed how they valued and worked to strengthen the relationship between Emory University School of Medicine and Piedmont Hospital.

This a sample of the book, front matter and partial first chapter. 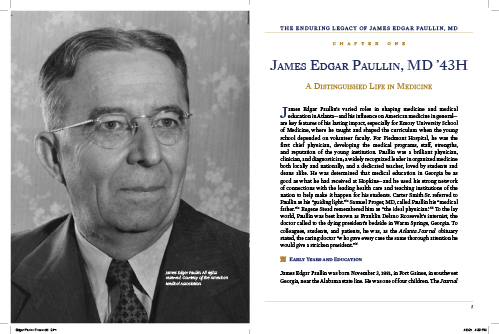 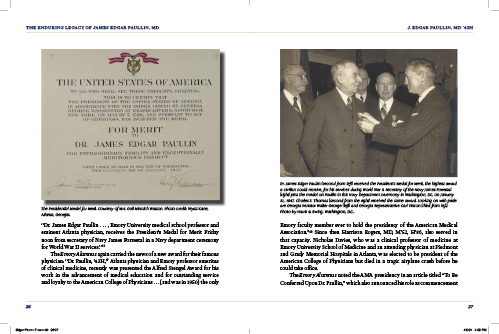