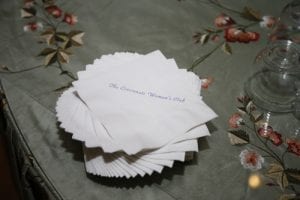 The Cincinnati Woman’s Club received its manuscript just before the Easter holidays. The club has retained Bookhouse Group to capture its remarkable history and 125-year legacy of continuing community service.

Near the turn of the 19th century, an energetic group of seven women from Cincinnati had worked together to create the highly successful Cincinnati Room in the Woman’s Building at the Chicago World’s Fair of 1893. The inclusion of the Woman’s Building was a daring, even radical, experiment for its time and it was popular beyond all expectations. When the fair was over, the women returned to Cincinnati, filled with enthusiasm for other challenges they could undertake in the fields of education and philanthropy, and through their efforts, the Cincinnati Woman’s Club was established. Bookhouse was retained to commemorate the club’s its historic 125th anniversary.

The CWC continues to promote social, educational, and artistic growth in the community. Among some early successes of the club were the introduction of neighborhood playgrounds and the establishment of school gardens. Today the club continues to emphasize both education and philanthropy, still adhering to the course set in 1894. Members can take advantage of more than 400 educational programs every year and participate in a wide range of philanthropic activities.