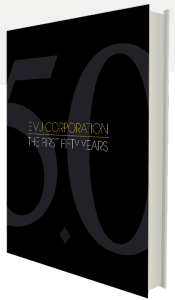 Celebrating the company’s 50th birthday at their Dallas office, Dottie McCallen, on EMJ’s communications staff, announced emphatically “It’s beautiful!” Dottie was referring to EMJ Corporation—The First Fifty Years, the history and story of a distinctive company and everything it took to get to where it is today. For nearly half of its fifty years in business, EMJ Corporation served a single client in a single industry: mall development. More recently, though, EMJ has engaged in a concerted effort to diversify, bringing an array of new clients into the fold and finding great success in a variety of market sectors, from industrial and hospitality properties to healthcare facilities and office buildings. It also has added a number of subsidiaries and standalone companies to the EMJ family. Over half a century, EMJ Corporation has surpassed anything the man who started it all, Edgar M. Jolley, could have imagined, with over 280 million square feet of construction projects completed nationwide.

EMJ Corporation celebrated its 50th Anniversary with a company-wide celebration in Dallas. As part its activities, EMJ unveiled its commemorative coffee-table book, which through stories and pictures tells the story from beginning to end of the success story that is EMJ today. The company reached out to Bookhouse Group, a Georgia book publisher to develop the book, entitled “EMJ—The First 50 Years.”