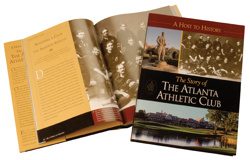 International renown Atlanta Athletic Club, the home club of golfing legend Bobby Jones and recognized as one of the best clubs in the nation, has published the second printing of A Host to History—The Story of the Atlanta Athletic Club. Originally published in 2005, the club needed more copies of this much sought after book. This sterling and lively history literally pulls the reader through its 200 pages.

One particular chapter, “Hosting the Majors,” vividly describes the club’s special role in attracting major golf championships. The Atlanta Athletic Club is one of a handful of elite clubs in the nation that, in the history of golf, has hosted multiple majors for both men and women.